About the world heritage

Niutsu Hime Shrine was registered as a World Heritage of “Sacred Places and Pilgrimage Routes in the Kii Mountain Range” in 2004. UNESCO rates this site as being “unique” because “Shintoism, rooted in the ancient tradition of nature worship in Japan, and Buddhism, which was introduced to East Asia from India fused in this site, this relationship has continued up to the present over 1000 years and its cultural landscape still exists.”

“fusion of the Shintoism and Buddhism” 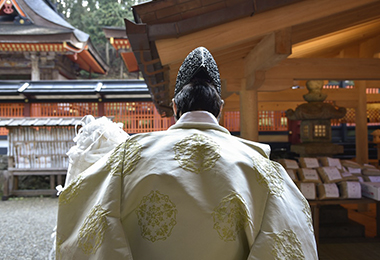 Over 1000 years in this statement means that Mt. Koya was opened by Kobo Daishi (Kukai) 1200 years ago in the shrine’s sacred area of the northwestern part of the Kii Mountain range used as the shrine territory more than 1700 years ago. In opening a konpon dojo-seminary of the Shingon Esoteric Buddhism which Kukai had learned and acquired in Tang, he built a Shinto shrine to enshrine the gods (Niutsuhime-no-Okami and Takanomiko-no-Okami) who guided him to Mt. Koya and bestowed him with the land. It was this time when the full-scale “fusion of the Shintoism and Buddhism” started.

The whole area consisting of “Mt. Koya” (present Kongo-buji Temple) founded by Kukai, “Jison-in Temple” built to facilitate construction and operation of Mt. Koya and “Niukanshobu Shrine” built as its Chinju-sha shrine (Shinto shrine on Buddhist temple grounds dedicated to the tutelary deity of the area) in the shrine territory of “Niutsu Hime Shrine” constitutes this World Heritage. In the halfway of Koyasan choishi-michi connecting “Jison-in Temple” along Kino-kawa River to “Kongo-buji Temple” on the summit of Mt. Koya there are “two front gates” – an entrance to the precincts of “Niutsu Hime Shrine.” It has been a custom to visit this shrine before climbing up Mt. Koya.

This shrine had been protected by 56 Shinto priests, Buddhist monks, shrine maidens and Shinto musicians until Buddhism and Shintoism were separated 150 years ago. With the separation of Buddhism and Shintoism Buddhist monks returned to Mt. Koya and Buddhist facilities were destroyed.
We still often see Buddhist monks reading a sutra to “Myojin-san” on Mt. Koya and chanting devotedly Hannya Shin-gyo (Heart Sutra) under the Romon (two-storied gate) of this shrine. Kobo Daishi tried to spread to common people Buddhism that had so far been confined to emperors and nobles.

the relationship of “protecting and being protected” 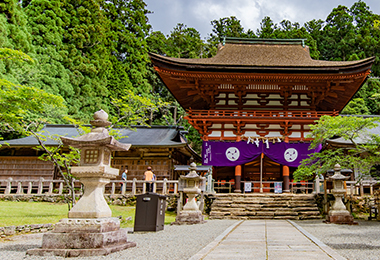 The faith in Japan since ancient times is to find out god figures in nature, gain protection by nature by respecting and taking care of nature and gain protection by ancestors by taking care of ancestors…in this way the relationship of “protecting and being protected” with nature and ancestors has been cherished.
New Buddhism. The attitude of Kobo Daishi has long been abided by his pupils. In the course of learning venerable teaching of the Shingon Esoteric Buddhism, “Myojin-san” plays the role of a guardian deity.

Expression of a racial spirit of Japanese people

Even now on Mt. Koya Niu Myojin, Koya Myojin, Kehi Myojin and Itsukushima Myojin are faithfully enshrined in the shrines dedicated to deities (Miyashiro) of the Danjogaran complex and monks continue chanting sutras every day while each temple praises Kobo Daishi and Myojin-san, chanting as “Mamudaimyojin.”
Japanese people almost never battle over a difference in religion. This is an expression of a racial spirit of Japanese people who have protected what should be protected and accepted what should be accepted in the place Shintoism and Buddhism have coexisted from ancient times.