It is not known when a god was enshrined in this region as it was very long ago. It is said that the buildings of the Shinto shrine were built about 1700 years ago. It is said that the shrine pavilions were built by Emperor Ojin, and that a vast area of land in the northern part of the Kii Mountains was donated to the shrine. In “Nihonshoki” (Chronicles of Japan), the oldest history book created by the government, “Amano-no-Hafuri” who was the chief priest of this shrine appears at about the same time. 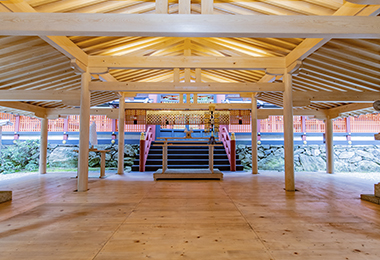 The enshrined deity, Niutsuhime-no-Okami is said to be a younger sister of “Amaterasu-Omikami” that is most respected by Japanese, agricultural people, as a god who has spread agriculture to the Province of Kii and the Province of Yamato.
It is a famous story in “Konjaku Monogatarishu” (lit. Anthology of Tales from the Past) that, before Kobo-Daishi (Kukai) opened Mt. Koya, “Takanomiko-no-Okami”, who is a mikogami (child god) of “Niutsuhime-no-Okami” and his messengers, white and black dogs, escorted Kobo-Daishi up to the summit and Mt. Koya, a part of the shrine territory, was given to them from “Niutsuhime-no-Okami”. Kobo-Daishi built a shrine dedicated to this goddess (Miyashiro) in Mt. Koya, and enshrined this goddess as the guardian deity.

“Ni” in the name of the goddess means the ore of Syusha (cinnabar), which is the raw material of the color vermilion and the geographical name “Niu” and this shrine are said to be located where there is a vein of that ore. There are more than 180 shrines enshrining this goddess in Japan including small ones. Niutsuhime Shrine is said to be the goddess enshrined by “Niu clan,” an ancient local ruling family who controlled this “vermilion” and is the grand head shrine of all Niutsuhime shrines throughout the nation.

Episode of Kii no kuni Ichinomiya. 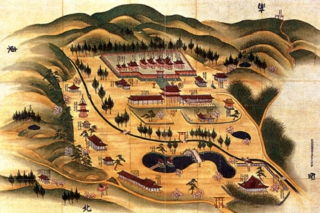 “Vermilion” is coated onto the buildings of shrines and temples and shrines’ entrance gates as vermilion and red colors are thought to act as an amulet and reject something evil. During the Genko (Mongol invasions of Japan) in the Kamakura Period, it says that an omen of Gen (Mongol) attacks was received at this shrine and that the goddess of this shrine took leadership in blowing divine wind, causing the Gen army to retreat. The Shogunate extended a great appreciation, made a lot of donations and designated this shrine as “Kii no kuni Ichinomiya.” This is an episode showing evidence of strong belief in Niutsuhime-no-Okami with the divine virtue of clearing all types of disaster.

Two front gates located in the halfway of “Koyasan choishi-michi” on the front approach to the pilgrimage to Mt. Koya are entrances to the precinct of the shrine.It has been a custom to climb up Mt. Koya after visiting this shrine first as this was the goddess who bestowed Kobo Daishi (Kukai) with Mt. Koya.

Main shrine is designated as a national important cultural property. 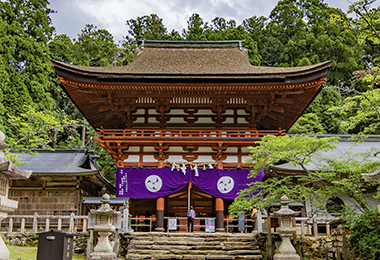 The existing main shrine was reconstructed in 1469 and is the largest in size in Japan of all shrine buildings in Ikkensha Kasuga-zukuri style (built to the width of just a single bay at the gable ends). It is gorgeous and glory with vermilion color, sculpture and coloration and is designated as a national important cultural property along with its Romon (two-storied gate). The main shrine consists of four halls: Niutsuhime-no-Okami is enshrined in the first hall, Takanomiko-no-Okami in the second hall, Ogetsuhime-no-Okami in the third hall and Ichikishimahime-no-Okami in the fourth hall. 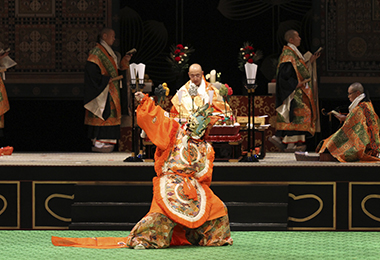 Shintoism and Buddhism have coexisted in Japan since Buddhism was introduced to Japan 1500 years ago. A Buddhist mass (hoe) accompanied by court dance and music had been held by priests of Mt. Koya before the altar of this shrine from the beginning of the Kamakura Period to the end of the Edo Period. That was an offering to the gods and at the same time was a space of “Shinjin waraku” (lit. harmonious blend of God and Man) where Gods and Man enjoyed themselves before the altar. In the Edo Period, this hoe was held magnificently as Japan’s largest hoe to celebrate the transfer of this shrine (Sengu) once every 20 years as “Amanosha bugaku mandaraku,” discontinued once but revived in 2015.